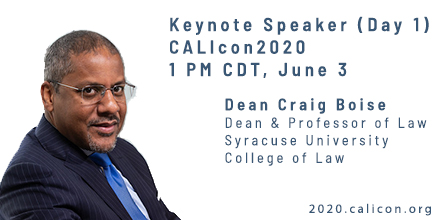 Craig Boise is dean and professor of law at Syracuse University College of Law where he has established a reputation as one of legal education’s leading innovators. During his nine years as a law school dean, he has established one of the nation’s two largest hybrid online JD programs, the first online joint JD/MBA program, one of the earliest Masters of Legal Studies programs for non-lawyers, the nation’s first law-school based incubator for solo practitioners, and a “risk-free” JD program granting a master’s degree in law to students who elect not to pursue a law career after successfully completing their first year of law school.

Before coming to Syracuse, Dean Boise was Dean and Joseph C. Hostetler-BakerHostetler Chair in Law at Cleveland State University’s Cleveland–Marshall College of Law and has held faculty positions at DePaul University College of Law, where he was also director of the Graduate Tax Program, and Case Western Reserve University School of Law. He has taught a variety of tax courses, and his scholarship on U.S. corporate and international tax policy and offshore financial centers has been published in the Texas International Law Journal, the George Mason Law Review, and the Minnesota Law Review, among others.

Dean Boise a former member of the ABA’s Standards Review Committee and the Steering Committee of the AALS’s Deans’ Forum. He served as a co-chair of the transition team for New York Attorney General Tish James, is a member of the New York State Judicial Institute on Professionalism in the Law, and is admitted to the bar in New York and Ohio. 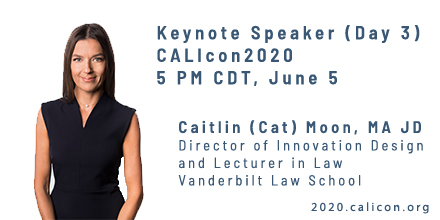 Caitlin "Cat" Moon is the Director of Innovation Design for the Program on Law and Innovation (PoLI) at Vanderbilt Law School. In this role, she works with PoLI colleagues to design the curriculum for both the JD program and the PoLI Institute, which provides interactive training in legal innovation to practicing lawyers and legal professionals. She also co-founded and produces the Summit on Law and Innovation (SoLI), which brings together experts across legal, technology, and other disciplines in collaborative legal innovation projects. Professor Moon currently teaches Legal Problem Solving, which is a course in human-centered design for law, as well as the Business of Law and Blockchain and Smart Contracts. In addition to her role at Vanderbilt, Professor Moon works with law firms, legal departments, and law schools globally to bring a human-centered design perspective to re-imagining the delivery of legal services and legal education. She regularly speaks and facilitates workshops across the United States and Europe on the application of human-centered design and creativity to realizing innovation in both the legal profession and legal education. With a deep interest in the intersection of law and blockchain technology, Professor Moon founded Ledger.Law, a consultancy providing companies and law firms with counsel on blockchain related to regulation, policy, and legal structure. Before joining Vanderbilt Law School's faculty and founding Ledger.Law, Professor Moon provided legal counsel and strategic guidance to start-up companies throughout her 20 years of legal practice in Nashville. She is an advisory board member of the MIT Computational Law Report. Professor Moon also is a co-organizer of the Music City Legal Hackathon, sponsored by PoLI and part of the global Legal Hackers community, which brings together legal professionals, technologists, designers, and other professionals to create technology solutions to provide access to justice and legal services.